Why wait till it is perfect? 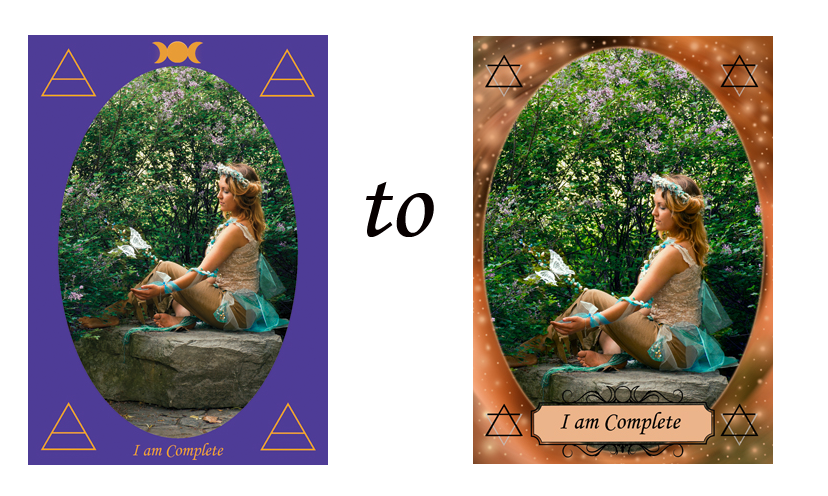 I knew it wasn’t complete but I posted it anyway. Seeing it “live” inspired the changes and process shown below.

One of the biggest blocks in creativity most of us face is based on our belief that everything needs to be perfectly evolved and formed in our minds before we can start on our projects. I know this because battling this “perfection demon” is actually one of the toughest lessons I have had to face myself many times. As I have begun a few new projects at the same time these past few months, this self-doubt demon has raised its voice for me so loudly I felt inspired to write about it in hopes others would benefit.

The story of my block begins several months ago when I completed a creative project that had engulfed me and my time on an off for years. I knew I would complete it eventually but indeed life got in the way and it took far longer than expected. It was with near relief that I proclaimed it successfully completed and I planned on relaxing for a short while. However my supporters, well wishers and the universe had other plans.

Within days of completing my huge task people began asking me what was next for me and my projects. Part of me felt gratitude for their question as it showed me they were interested in what I had created and simply wanted more soon. Meanwhile, another part of me struggled with the knowledge of how much work another similar project would be. The sheer idea of starting new work in the series for Mystic frightened me simply because I was not sure there was any more in me to give so soon on completing Mystic Bliss if at all.

But this is where the universe and source came in. As soon as I posted the question: What could I do to follow up on Bliss? to myself the answers and ideas started to flow. I spent quite a bit of time writing in my journals again and also started sewing and capturing new images for a second deck. Strangely enough, once that started, ideas for a third deck presented themselves often as new concepts and thoughts made their way onto the pages of my notebooks. As can be imagined I was distressed by this at first since creating a second deck alone had frightened me deeply. Yet I started to surrender to the process and the wheels began to turn.

Step two was to begin to actualize a few critical things to make the projects feel real. As a visual project, the key components for me revolve around visual impact and symbolic meaning to some of the imagery. I stalled at this point. I told myself I would have to spend time researching, cross referencing and testing a few things before I proceeded. My stall started to weigh heavy as the weeks slipped by and certain time line goals were missed. I fought against the frustration and near depression that threatened as I felt less than worthy of the inspired concepts and ideas I had received but a few weeks before. Then I got brave and posted some very raw and incomplete work and concepts on social media.

I was not certain where the look of the new deck would be and was stuck on the blue and gold concept at first. It did not feel right but I was blocked. Some things I knew I wanted such as the symbols but the design started out too simple and I kept working at it. I am now happy with the progress.

As I predicted, response was not strong but the point is that I put it out there. I had pushed beyond my need to be “perfect” before claiming what I was doing. The beauty and reward was that within 24 hours of posting the 1st image I found the courage to try other things with the base concept until it evolved into what I now know is the right direction. The overall sample is far from perfect but I am inspired and feel confident again. I was so afraid of disappointing people, including myself, in showing something in mid process that I failed to work through my block. Only a few comments were made and most of these were constructive but it was not the comments that sparked the unblocking and fresh ideas… it was seeing the early stages “up in lights’ so to speak and looking at it with fresh eyes as others would see it. As soon as I saw it posted I knew what could be fixed and I found my direction quite easily from there.
So the moral of the story is:
Don’t wait till it is perfect to take the next step, the next step comes when you put it out there knowing it is not perfect and remain open to what comes either from others or through your own knowledge and intuition. Fear is an illusion but perfection is an even bigger illusion. Just put it to the test, however that translates for you. In my case, testing my thoughts was to post a draft of my current work out there. This may not be your personal testing ground however you will know what it is when you focus.